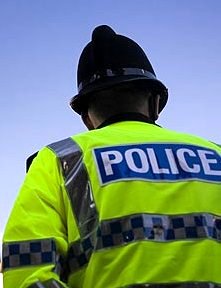 The news that Staffordshire Police must save £30million from its 2011 – 2012 budget hit me like a bolt out of the blue. Given that the Police Authorities total yearly budget is £190million it is hard to believe the forces assurance that this saving can be made without cutting front line services. This is especially true as this latest cut is to be made on top of the £4.7million savings that have already been promised from this April. Even if police bosses make the majority of cuts in behind the scenes support it does not take a genius to realize that these jobs will have to be covered by someone, and that as the majority of staff left will be frontline police officers some of these will have to be deployed to cover the shortfall!

I’m particularly concerned that if frontline officers are reduced the rural areas are bound to suffer most. Already it is rare to see a police office in my neck of the woods, not because they don’t care or can’t be bothered but rather that they are being deployed more and more to tackle crime in the populated urban areas.

As a Borough Councillor I attend Haughton, Church Eaton and Bradley Parish Councils and although an item is included on the agendas for a report from a representative of the local policing team I honestly can’t remember the last time a police officer actually turned up! While I understand crime levels in this area are low it is still important residents are reassured that they are protected and served by the police, and this can only be achieved by a higher level of visibility.

I certainly will be the first to acknowledge that the day’s of the “Village Bobby” are over but I only hope that once the £30million cuts bite the days of the “Area Bobby” are also not assigned to the history books!
# posted by Barry Stamp @ 3:50 PM 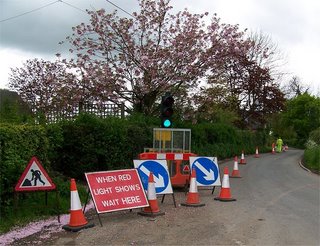 Over the last couple of years I’ve been promised time and time again that work was going to be carried out, but all the County Council managed to do was to suck-out the drains which had little effect on the water which flooded the road after even the slightest shower! However as one or two residents have already commented surprise surprise now that the County Council elections are just a few weeks away more substantial work has started. I have to say I do agree with that sentiment and just wonder if they would have bother to do anything if the election was not coming up!

However I must thank the County Council for actually making the effort whatever their motive might be as the state of the road was getting beyond a joke and many local residents feared the lane would become impassable to all but the largest 4x4 if nothing was done!

The work here must however be just the start for further work in this area and I know many residents will be looking with fresh hope that their flooding problems will now be solved!
# posted by Barry Stamp @ 9:46 AM

I don’t like to say I told you so, but after I questioned who actually owned the missing barriers on Doxey Road Bridge the County Council remembered they had actually paid the contractor for the work, and yes they did own the barriers. They also asked the police to investigate claiming they had been stolen. It’s not surprising that the missing barriers suddenly reappeared!

Why no one else had though to ask that simple question is beyond me, and had I not raised it the County Council would have taken weeks getting new barriers made and installed. Only then would they have realized they had already paid for the work but it would then have been too late as they would be faced with another bill.

Of course there would have been two losers in this situation. Firstly local residents who would faced weeks of delay while the temporary traffic lights made the bridge safe, and secondly local taxpayers would have had to pay the bill twice!

Why is the County Council dragging their feet over the Doxey Road bridge?

I was amazed to hear that sub-contractors work for Wrekin Construction had removed safety barriers from the recently rebuilt Doxey Road bridge because they were worried they would not be paid for their work as Wrekin had gone in administration a few days ago. Removing these barriers has not only made the bridge dangerous, but has also meant that both local residents and the hundreds of people travelling to Stafford from Haughton and Gnosall are once again inconvenienced by the temporary traffic lights that have now been installed.

While I sympathize with the firm in question, one is left wondering how the County Council allowed this situation to develop. If they have already paid Wrekin Construction for the work surely the barriers belong to the Council and the contractors had no right in taking them away. If this is case why has the Council not taken action to get then returned immediately?

On the other hand if the bill has not been paid the Council has the money to replace the missing barriers without delay! In either case I cannot understand why the Council is talking about putting temporary concrete barriers in place in the next few days and then reinstating permanent barriers ‘at some point after that’.

As a week as already passed since the original barriers were removed I must ask why the County Council are dragging their feet. If barriers like this are damaged on the motorway they are replaced in hours – not weeks, which will be the case in Doxey.

Leaving the bridge in this state is an absolute disgrace!


Stafford Hospital - Replace the Management Board 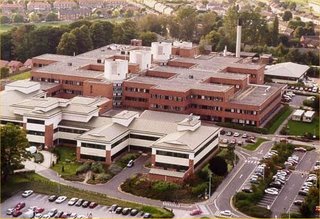 It’s difficult to come to terms with the appalling news about Stafford Hospital. Everyone knew that the report from the Healthcare Commission into the above average death rate at the hospital would be bad, but I’m sure no-one was prepared for what the finding were. Perhaps we should have realized that something was afoot when Toni Brisby the Chairman of the Trust and Martin Yates the Chief stepped down from their post a couple of weeks ago.

At the time all the local press reported that both had resigned from their post, but it has now emerged that in at least Mr. Yates case he had merely stood aside and was still on the hospital payroll and was receiving his full pay! What is interesting is that no one at the Hospital or indeed on the Board tried to put the record straight, instead everyone seemed to want to hide exactly what was happening. By taking this stance the two people who could answer the questions and criticisms about the hospitals failings effectively side stepped the issue and left other people to pick up the pieces.

In my mind this leaves yet another cloud over the current Hospital Board. First and foremost public confidence in the hospital has to be rebuilt and I’m concerned that with way the current board has acted over the past months this will be an impossible task. Perhaps the only way this can happen is for the whole of the management board to be replaced. With this in mind I do hope the Health Secretary Alan Johnson will see fit to remove the whole of the existing board and replace it with members in which the local community can once again have trust!
# posted by Barry Stamp @ 4:44 PM 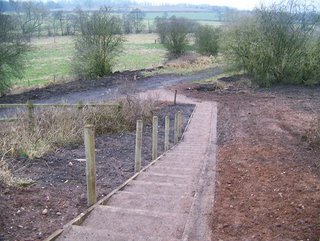 The recent work to extend the hard surface on the Greenway footpath from the A518 road bridge to the west of Haughton to Lowfield Lane on the outskirts of Gnosall will be welcomed by everyone who uses the route. As I live near to this path I know just how popular it is with horse riders, cyclists, joggers and walkers and this new extension will only add to everyone’s enjoyment.

However I was surprised when I stopped on the road bridge on Lowfield Lane and looked down on the end of the new path. Firstly for some reason perhaps only known to a few privileged people the new hard surface finishes a couple of hundred yards short of the bridge itself and secondly the only way to access the path from the lane is down a step set of new steps cuts into the embankment.

This lack of easy access is a real pity as I’m sure walkers from the centre of Gnosall will use Lowfield Lane to form a short circular walk back to the village. The steps however will make access difficult for the disabled, the elderly and mothers with small children in pushchairs. I’m also concerned that as the new hard surface finishes short of the bridge walkers to and from the Haughton direction will be forced to walk on the uneven and muddy old track bed.

What a Performance - Seighford Village Panto 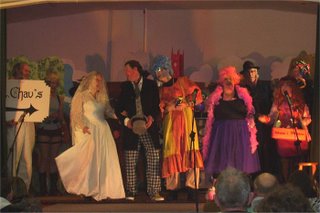 Over the weekend I had the good fortune to go and watch the Seighford Village Pantomime and what an excellent and enjoyable couple of hours it turned out to be! Over the years I’ve developed a real hatred of pantomimes, probable fuelled by the fact I was made to go to one as a child and the experience stuck in my mind. But Seighford’s production has certainly changed all that!

While the title of the show was “Jack and the Bean Stalk”, this children’s favourite had been rewritten to tell the story of the village of Sinford which was suffering under the oppression of the local landowner Lord Sinford. The story revolved around the fact that Lord Sinford wanted to turn the local WW2 airfield into an international airfield which would have devastating effects of the local village especially from excess noise. To make matters worse the cottage belonging to Jack and his mother was to be demolished to make way for the scheme.

Andrew Hetherington – Seighford’s vicar play the part of Lord Sinford to perfection and strutted around the stage in ridding habit and dark glasses hurling abuse at the residents of Sinford and the audience just for good measure.

As with all good pantomimes everything worked out well in the end which never really seems to happen in real life. As the audience left Great Bridgeford Village Hall there was much speculation as to whether or not the show had been modelled on any real village or events. I certainly wouldn’t want to enter this debate apart from saying I always thought pantomimes were just made-up stories, but then again I could be wrong !!!!!!

Congratulations to everyone who took part in bringing the whole community together for such a great afternoon of family entertainment. I'm really looking forward to the next production
# posted by Barry Stamp @ 4:24 PM

Barry Stamp would like to welcome you to his diary. He hopes it will give the reader an insight into his life as a local councillor